KIMBALL NEBRASKA – Located in the panhandle of Western Nebraska, Kimball began receiving Winter Storm Warning alerts from the National Weather Service on Saturday, March 9, 2019. Kimball County Manor had precautionary measures in place, which undoubtedly assisted in their ability to continue to provide care for their residents.

The National Weather Service predicted the storm would begin at midnight on Tuesday, March 12, beginning with rain followed by freezing rain. As it turned out, Tuesday was a “blue bird spring day” with temperatures in the low 50s and on the morning of Wednesday March 13, the temperatures were in the 40s.

Then, like a bad nightmare, things began to change drastically. Around 7:30 am temperatures began to drop and freezing rain began to fall.  By 9:30 am the Director of Maintenance warned out-of-town employees to head home as surrounding roads were treacherous and were expected to be closed. One employee—who lives 12 miles west of Kimball—left at 9:40 am and made it home safely; however, the winds were greater than 50 mph, there was blowing snow, a complete white-out and it felt like shards of glass were hitting her face. 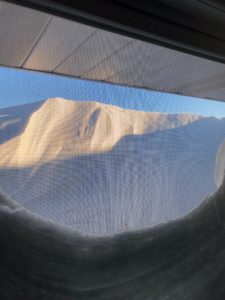 Looking out a window at a giant snow drift

Around 10:00 am the snow began to fall, and it accumulated rapidly.  The wind was howling and at 3:00 pm it was determined that roads were going to be impassable and only necessary employees should stay on-site. One nurse, Barb, had stayed in the Manor the previous night and remained on duty for the next couple of days, catching sleep when she could.

Sarah rallied the troops (who had already worked more than their full shifts) and they stayed and cared for the residents.  Rest breaks and meals were scheduled and Sarah jumped in to provide hands-on care; assisting her amazing, gutsy staff through the night.

As if this wasn’t enough, the Manor lost power at 10:00 pm and the power remained out the entire night.  The backup generator struggled to keep up with the full demand being placed on it, but everyone remained calm and worked their magic to care for the fantastic population.  Many of the staff worked through the night, more than 30 hours with no sleep.

As in any emergency, heroes come in many forms. Housekeepers, dietary and other support staff walked or got rides to the Manor from people in the community with 4-wheel drive vehicles. The power was restored at the Manor at approximately 9:00 am on March 14. 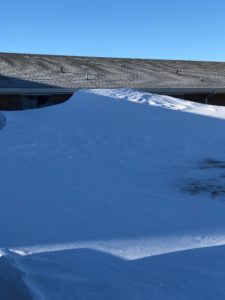 Some snow drifts reached the roof!

All entrances to the Manor were blocked with snow drifts, cars were buried in snow and there was no way to move them until they were dug out.  The Director of Maintenance worked tirelessly to keep at least one entrance opened for employees and/or emergencies.

On Friday, March 15, road crews were able to move the snow from the parking lot so that employees and visitors weren’t required to scale snow drifts that were over 4 feet deep. Several drifts were as tall as the Manor itself!

It is times like these when the true human spirit kicks in and people in crisis situations rise up and simply forget about themselves and do the right thing… taking care of others.

Many thanks to the staff at the Kimball County Manor and the tremendous work ethic that was shown by these people. If you would like to share your stories of heroism during emergencies, please contact HealthCap at 734.996.2700.

Thanks, and be safe out there!

Thank you for subscribing.

we respect your privacy and take protecting it seriously

Angie Szumlinski writes a blog highlighting the latest news, information, and studies affecting the senior living industry? You can subscribe and get all the latest information right in your inbox!